Released in 2002, “Freeek!” was far from being George Michael’s biggest hit, but it did mark a drastic change in direction for the pop singer. The futuristic music video that accompanied the single was directed by the still very much in demand director Joseph Kahn (Kylie Minogue, Britney Spears). The clip for “Freeek!” incorporated a futuristic theme — cyborgs and sophisticated ... END_OF_DOCUMENT_TOKEN_TO_BE_REPLACED 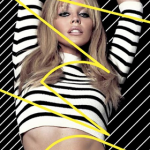 Kylie Minogue’s iconic single “Slow” celebrated its 10th anniversary last week, so I wanted take the opportunity to look back at one of Kylie’s greatest moments. It’s very rare that the melody of a song’s verses is just as strong and memorable as its chorus, but that happens to be the case with Kylie Minogue’s 2003 single “Slow.” When the opening beats ... END_OF_DOCUMENT_TOKEN_TO_BE_REPLACED