The Latest:
Home » Featured Stories » “Rising Star” Fails To Live Up To Its Potential

“Rising Star” Fails To Live Up To Its Potential 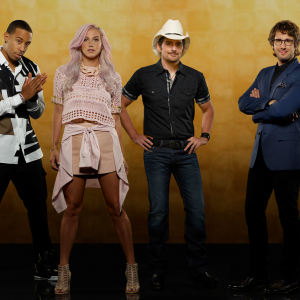 To be completely honest, I’m so fucking bored to tears of singing competition shows. We have American Idol, The Voice, The Sing-Off, America’s Got talent and Duets, do we really need another one?! But when I heard the concept behind the new ABC show Rising Star, I was a more than a little intrigued by the concept.

Hosted by Josh Groban, who also doubles as a master vocal coach, Rising Star features three celebrity judges: country music superstar Brad Paisley, pop music sensation Kesha and hip-hop artist and actor Ludacris. Although the celebrity judges control votes that can make up 21% of a total vote, the main judges are the home viewers. This is where viewer interaction comes into play. While a contestant sings, viewers watch live to vote via the Rising Star app for who gets to continue in the reality show. On paper, the concept sounds like a pretty exciting way to get the viewing audience interested and participating in what happens. In reality, the voting procedure just makes for a quick break from an utterly lifeless show.

Based on an Israeli series, Rising Star is just another vapid reality competition that is simply bogged down with too many scripted, artificial story arcs and faux suspense. At times, it actually feels as if it’s pandering to the most gullible of an audience. I think what ultimately disappoints here is that the show features just one singing performance between commercial breaks. That means that over a two-hour period, we only got to see ten performances! To add insult to injury, the artists who performed on tonight’s show did not have enough talent or stage presence to make the long wait between performances seem worthwhile.

As I mentioned before, some of the contestants’ stories come across cold and scripted. Take singer Macy Kate, 17, who was conveniently plucked from the audience after sending in an Instagram audition tape. The problem was that the Instagram audition tape Macy Kate sent in looked as polished and professional as any music video you would see on MTV. It was totally unbelievable and contrived. Something else is a little fishy about Macy Kate. Apparently, she was also contestant on the X Factor back in 2012. This is all just a little too convenient.

I think it’s important to recognize that Rising Star, first and foremost, is an entertainment show. Unfortunately, there was little to no entertainment being offered from Rising Star. Due to the tremendous amount of commercials, it felt like I was watching just one long advertisement. Sorry, ABC, but I will not be tuning in again next week. I have more interesting things to do, like laundry, cleaning the kitchen or watching ice melt.

New Music: Take That – “These Days”