George Michael has premiered the music video for his single “Feeling Good.” The song, originally written by English songwriters Anthony Newley and Leslie Bricusse for the musical The Roar of the Greasepaint – The Smell of the Crowd, is taken from his album Symphonica. The album, which was released in March, peaked at number sixty on the US Billboard 200. ... END_OF_DOCUMENT_TOKEN_TO_BE_REPLACED

Released in 2002, “Freeek!” was far from being George Michael’s biggest hit, but it did mark a drastic change in direction for the pop singer. The futuristic music video that accompanied the single was directed by the still very much in demand director Joseph Kahn (Kylie Minogue, Britney Spears). The clip for “Freeek!” incorporated a futuristic theme — cyborgs and sophisticated ... END_OF_DOCUMENT_TOKEN_TO_BE_REPLACED

George Michael will release a new live album titled Symphonica on March 17, 2014. The album will include live performances of several fan favorites, including “One More Try,” “A Different Corner” and “Praying For Time,” which you can download right now for free via his official website. Symphonica features production work from Michael and the late Phil Ramone, who passed ... Read More » 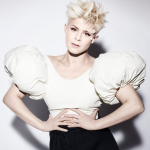 George Michael is teasing “exciting” news coming our way sometime next year. The singer posted a message on his official website saying: “Exciting news coming in 2014.” Despite promises a new dance album was coming a year or so ago, George has yet to deliver a full LP since 2004′s Patience, which peaked at number 12 in the United States. ... Read More »