According to The Official Charts Company, a Facebook campaign to get “It’s Raining Men” by The Weather Girls (Izora Armstead and Martha Wash) back into the UK Top 40 has resulted in the gay anthem re-entering the chart at number thirty-one. The campaign was launched by Darren Pop after UKIP councillor David Silvester wrote a letter to his local paper ... Read More » 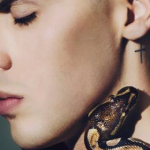 I’m going to come right out and say it at the beginning: I love this single. Yes, Aiden Grimshaw is best known for his appearance on the seventh series of The X Factor (UK) in 2010, but he always seemed like a fish out of water on the show. I felt he was destined for greater things than being categorized ... END_OF_DOCUMENT_TOKEN_TO_BE_REPLACED